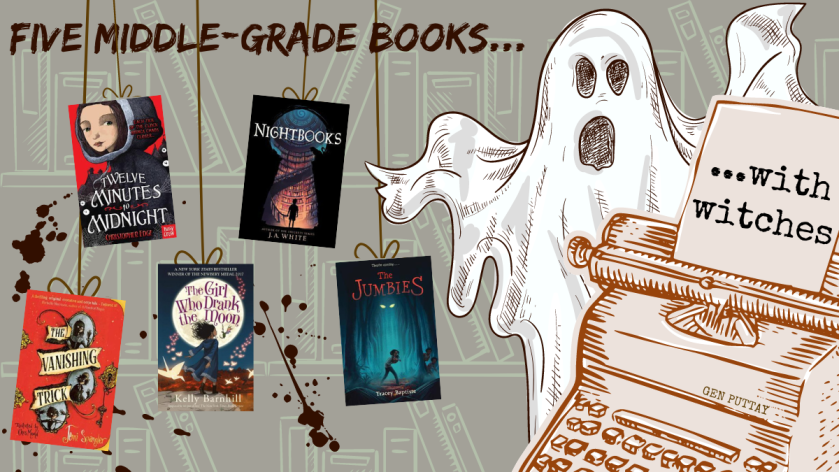 THE JUMBIES by Tracey Baptiste

Corinne La Mer isn’t afraid of anything. Not scorpions, not the boys who tease her, and certainly not jumbies. They’re just tricksters parents make up to frighten their children. Then one night Corinne chases an agouti all the way into the forbidden forest. Those shining yellow eyes that followed her to the edge of the trees, they couldn’t belong to a jumbie. Or could they? When Corinne spots a beautiful stranger speaking to the town witch at the market the next day, she knows something unexpected is about to happen. And when this same beauty, called Severine, turns up at Corinne’s house, Corinne is sure that danger is in the air. She soon finds out that bewitching her father, Pierre, is only the first step in Severine’s plan to claim the entire island for the jumbies. Corinne must call on her courage and her friends and learn to use ancient magic she didn’t know she possessed to stop Severine and to save her island home.

Incredible creepy story set in Trinidad and rich with Caribbean folklore, The Jumbies ticked all the spooky, witchy boxes for me. Suspense, intrigue, mystery, this magical tale is an atmospheric read you won’t be able to put down.

A boy is imprisoned by a witch and must tell her a new scary story each night to stay alive.

Alex’s original hair-raising tales are the only thing keeping the witch Natacha happy, but soon he’ll run out of pages to read from and be trapped forever. He’s loved scary stories his whole life, and he knows most don’t have a happily ever after. Now that Alex is trapped in a true terrifying tale, he’s desperate for a different ending–and a way out of this twisted place.

With nods to 1001 Nights and Grimm’s Fairytales, this book is seriously scary. Nightbooks is a proper page-turner oozing with nightmares and suspense.

THE GIRL WHO DRANK THE MOON by Kelly Barnhill

Every year, the people of the Protectorate leave a baby as an offering to the witch who lives in the forest. They hope this sacrifice will keep her from terrorizing their town. But the witch in the Forest, Xan, is in fact a good witch who shares her home with a wise Swamp Monster and a Perfectly Tiny Dragon. Xan rescues the children and delivers them to welcoming families on the other side of the forest, nourishing the babies with starlight on the journey.

One year, Xan accidentally feeds a baby moonlight instead of starlight, filling the ordinary child with extraordinary magic. Xan decides she must raise this girl, whom she calls Luna, as her own. As Luna’s thirteenth birthday approaches, her magic begins to emerge – with dangerous consequences. Meanwhile, a young man from the Protectorate is determined to free his people by killing the witch. Deadly birds with uncertain intentions flock nearby. A volcano, quiet for centuries, rumbles just beneath the earth’s surface. And the woman with the Tiger’s heart is on the prowl . . .

A fabulous book filled with quirky, charming characters you’re guaranteed to fall in love with. The Girl who Drank the Moon deals with sorrow, loss, family, belonging, whilst also drawing you into a magical and mysterious quest.

Why are the patients of Bedlam waking every night at twelve minutes to midnight? What is the meaning of the strange messages they write? Who is the Spider Lady of South Kensington?

Penelope Tredwell, thirteen-year-old owner of The Penny Dreadful, is always seeking mysteries to fill the pages of her magazine. But this isn’t any ordinary story, it’s the future.

And the future looks deadly…

This book hooked me from the very first page. There’s such a wonderfully macabre atmosphere to it, set in the Victorian era at the turn of the century when magic meets innovation. There isn’t a witch in the traditional sense, but for me, the Spider Lady exuded those eerie sorceress vibes, which is why I had to include Twelve Minutes to Midnight in this list.

THE VANISHING TRICK by Jenni Spangler

Step into a world of secrets, folklore and illusions, where nothing is as it seems and magic is at play…

Madame Augustina Pinchbeck, travels the country conjuring the spirits of dearly departed loved ones… for a price. Whilst her ability to contact ghosts is a game of smoke and mirrors, there is real magic behind her tricks too – if you know where to look.

Through a magical trade, she persuades children to part with precious objects, promising to use her powers to help them. But Pinchbeck is a deceiver, instead turning their items into enchanted Cabinets that bind the children to her and into which she can vanish and summon them at will.

When Pinchbeck captures orphan Leander, events are set into motion that see him and his new friends Charlotte and Felix, in a race against time to break Pinchbeck’s spell, before one of them vanishes forever…

Creepy, Gothic, with a fantastically twisted villain, this book is bewitchingly written. Set in Victorian England, The Vanishing Trick explores spiritualism with seances and tarot cards, mystery, misdirection, and magic. An incredible dark fairytale and a must-read!